Yesterday, D. asked what we should get for lunch and I replied, “sandwiches”! We had just read about a relatively new sandwich shop, featuring Boars Head Meats, in The City Paper and decided to give it a go!

I had a turkey with brie, romaine, tomato and dijon. The first half, enjoyed in the well-packed-for-a-Sunday cafe was great, as was the second half I ate later on. No complaints outside that I would like a little hot-sauce (ie. TABASCO®) bar.

Also, if they are to represent English sandwiches, I think it’s a shame to not offer some sort of a ploughmans. But maybe that’s just me. 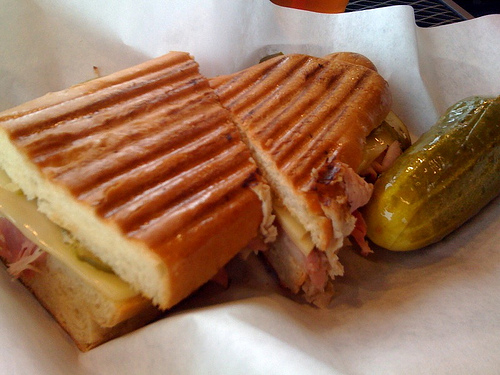 D. really loved his “cuban” sandwich. I used quotes because it’s not quite spot on, but it’s close–the closest we’ve found in the area. We’ve both spent time in Miami (me more so than D.) and like anything, it’s the small things that count; not judging. I smuggled a real cuban home (Miami to Toledo) last month for D., while I was there for work… it would have been a crime not to.

In closing, while I really don’t care for Levis Commons, we’ll probably be back. My own personal message to JB’s is “move to Downtown Toledo.” And my personal message to the rest of Toledo is “SUPPORT LOCAL SANDWICH SHOPS!” (note: each linked word above brings you to a different Toledo gem).

Oh, one last note. The pickles are particularly awesome–fresh and crispy–so when you are asked, “pickles or chips” get the pickle!

If you do find yourself in Miami at some time, South Beach in particular (old stomping grounds), get yourself a “cuban” at either Davids Cafe, or Puerto Sagua. Trust me.