D. has been talking about Soul food for a while now. Both of his favorite soul-spots have shut down over the past 2 years and he thought he was out of luck. But the other day D. spotted a thread on a local Toledo message board mentioning a place called Ruby’s. We decided to check it out! More from D… 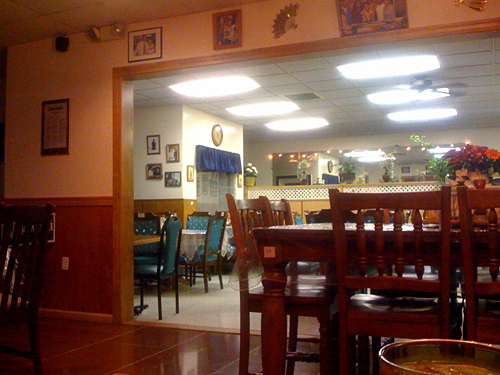 The atmosphere of Ruby’s was unexpected. It sits inside an unassuming strip mall on Door street in a quiet part of town. As we walked inside, we immediately felt as if we might be in someone’s home. The lighting was just right, everyone seemed happy, and diners were watching Jeopardy on the television. 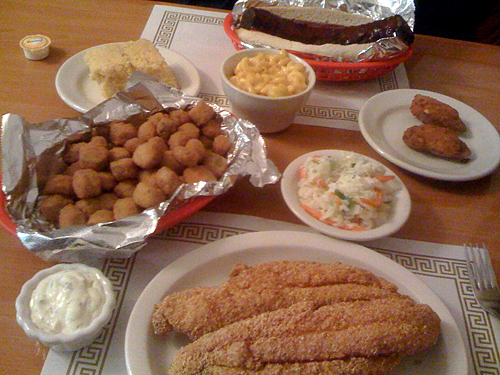 The menu offered so many choices we were a bit overwhelmed with what to pick. J. ordered a hot “polish” sausage sandwich, and I ordered the catfish dinner. Let me tell you something… that catfish was some of the best fish I’ve ever had in Toledo and I’ve eat a lot of fish. The cornmeal crust was crispy and the fish was perfectly cooked–hot and flaky. I ordered fried okra as a side and it was unbelievable. I normally steer clear of okra, but I had a feeling it was going to be good and boy-oh-boy was I right.

All the side dishes were as expected… from the home-style mashed potatoes to mac & cheese. The only disapointment was the corn bread. It tasted as if it was made with bad buttermilk, or maybe spoiled shortening. But, with all of the regulars coming in and out, I assured myself that it must be a rare mistake and something we shouldn’t experience again.

Toledo, I’m happy to report that Soul-Food is alive and well.