This Summer was full of great festivals, but due to travel D. and I missed many of them. Luckily we were able to visit to the Birmingham Festival on the East Side of Toledo. We were treated to a tour from resident superstar B. R. U.–her family has been in the neighborhood for generations. She showed us all the hotspots and cute churches while relaying stories of dancing during hot sweaty summer fests as a child.

The festival is one of Hungarian roots and featured some really amazing foods. Foods that D. and I had never tried before, let alone heard of, like the “hunky turkey”. 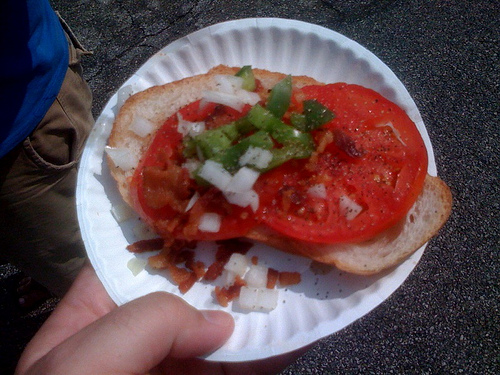 Hunky turkey is sliced bread topped with bacon drippings, tomato, onion and green peppers. Pretty epic. But, my favorite dish of the day would have to be the cabbage and egg noodles that came in a little styrofoam bowl at the VFW–best 2 dollars I have ever spent.

Next Summer do not miss out on this festival. Great people watching (like woah), music, dancing, drinking, and food. AND, a hilarious Tony Packos pickle-eating contest.