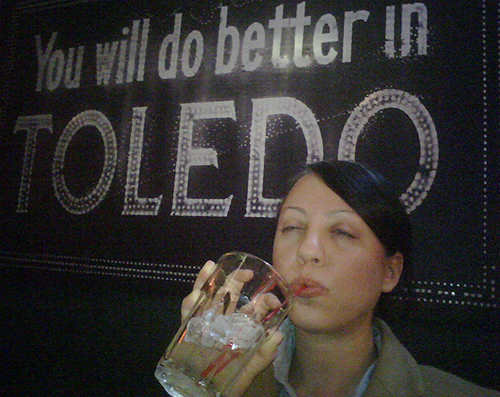 You Will Do Better in Toledo Tee

“In 1913 the Toledo Commerce Club held a contest to create a new slogan for the city of Toledo. The winning entry, “You Will Do Better In Toledo”, was submitted by four people. It was determined that C.W. Lammers was the first to send in the slogan and he was declared the winner. The slogan was illuminated on a large electrical sign in downtown Toledo along with two other sections featuring a locomotive and a lake freighter.”

The sign remained up until City Manager, Russell Rink, had it removed because it was beyond repair. At least, that’s according to a Sep. 7th, 1959 article from TIME Magazine.

A replica of the sign remains in Wesley’s Bar on Adams Street in uptown. Get your very own replica from local tee-shirt design co. JUPMODE.

Tags: History, JUPMODE, You will do better in Toledo

Pick Your Own at Spicer Orchards
Marielito