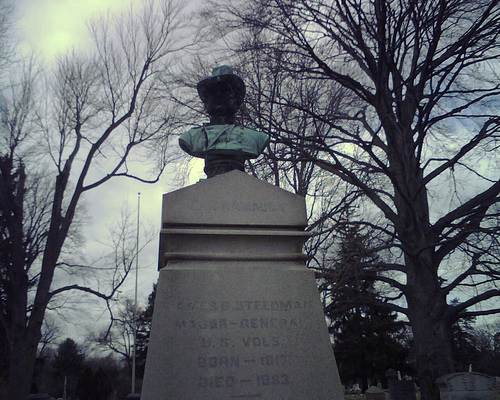 Sometimes D. and I like to get “lost” and drive around Toledo neighborhoods we don’t regularly find ourselves. This weekend we ended up in the historic Woodlawn Cemetery and decided to explore a bit. As far as cemeteries go, Woodlawn is quite beautiful with it’s rolling hills and bridge-covered creek. I was not surprised to find the rural cemetery movement described as “pastoral oases in the midst of urban sprawl”. I would almost like to picnic there in the summer… maybe.

The most striking monument would have to be the pyramid (pictured above). We stopped to admire it for quite a while, wondering about it.

As it would happen, a couple days ago I was flipping through “You Will do Better in Toledo” (a new-ish book from The Blade) and came across some pages dedicated to John Gunckel, the founder of the Toledo Newsboys Association. To say “Gunck” was much loved would be an understatement and apparently over 1,500 Newsboys attended his funeral — each with a rock, which would be later used to construct this unique memorial.

The inscription reads, “The newsboys’ friend John Elstner Gunckel, 1846-1915. ‘There was a man sent from God whose name was John.’ Toledo honors: a citizen without reproach, a friend without pretense, a philanthropist without display, a Christian without hypocrisy.”

A Friday Night in Toledo
The 577 Foundation