I had never heard of fried pickles until my first visit to Toledo. Tony Packo’s was touted by D. as THE place for fried pickles… and I fell in love with those wonderfully breaded and fried slices. Easy Street also has fried pickles on the menu, in the form of spears and with a different sort of batter (more like Tempura). The only other place I’ve had fried pickles was in North Carolina at the famous Penguin Drive-In; they were thin slices… about a quarter of the size of Packo’s pickles… and man… so good! 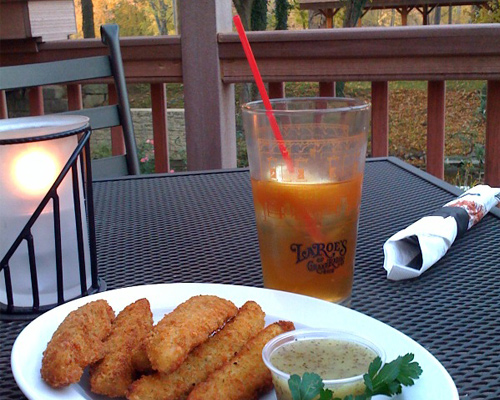 This weekend we stopped at LaRoes’s in Grand Rapids and were pleasantly surprised to see fried pickles on the menu, so of course we ordered them. These were entirely different… spears with a crunchy (maybe cornmeal?) batter that was seasoned well. They came with a sweet poppyseed dipping sauce which at first seemed an odd pairing, but once we tried them it just made sense. Highly recommended. The weather is still nice enough to sit outside and enjoy the river view. Do it.