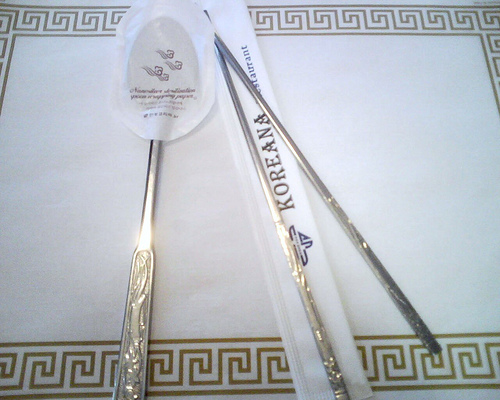 We were googling for a close-by sushi place for lunch and found this great blog post on Glass City Gourmet about a Korean joint in Toledo. Who knew? So we settled on sandwiches for lunch and made plans to have dinner at Korea Na.

The following is a guest post written by D. 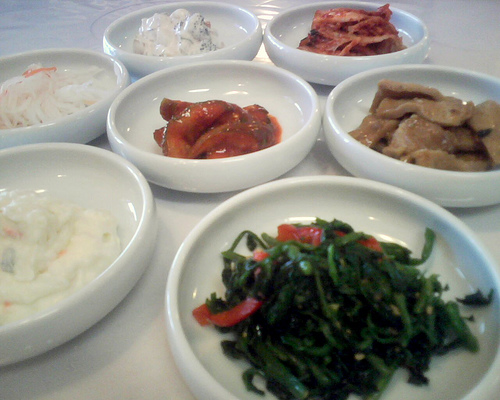 “Even though I ordered the #10 Doen Jang Jige (bean paste casserole), I was served the very tasty #12 Soon Tofu Jige (tofu, mushrooms and a couple of white muscles in a spicy broth). You had the #14 Na Myum which was a giant bowl of ramen, scrambled eggs and vegetables in hot broth. We shared a #17 Good Mandu (fried dumplings stuffed with meat, mushrooms, zucchii and bean sprouts with a spicy dipping sauce).

Our two entrees also came with an assortment of small dishes to share. There were 7 little dishes in all, and included: an apple and grape mayonaise salad, kim chee, some sort of mushroomy dried/cured tofu, pickled greens similar to seaweed, spicy marinated cucumbers, chilled pickled shredded radish and a creamy cold potato-like salad. 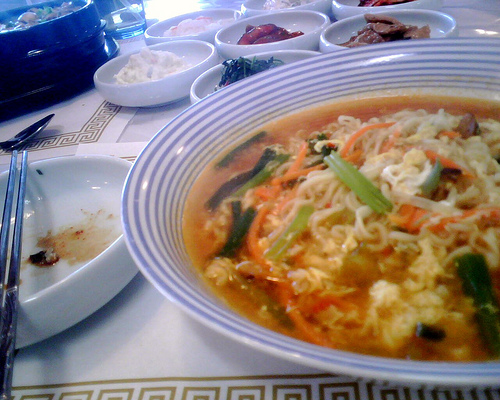 The restaurant is very unassuming and more about the food than the atmosphere. There was no music playing, and at around 7:30 the very loud bar next door could be heard through the seemingly paper-thin walls as they started what sounded like a top 40 kareoke party. Somehow that just added to the uniqueness of this new Toledo gem.

Dinner ended up being just over $20 and included our two iced teas, and a tasty orange slice for dessert.

After dinner we stopped into the Asian market next door, which featured Korean, Japanese and Chinese groceries. Its always fun to pick up some exotic pasteries to supplement our American cupboards.”